Dissecting ChatGPT: Is it a Passing Trend or a Lasting Phenomenon? 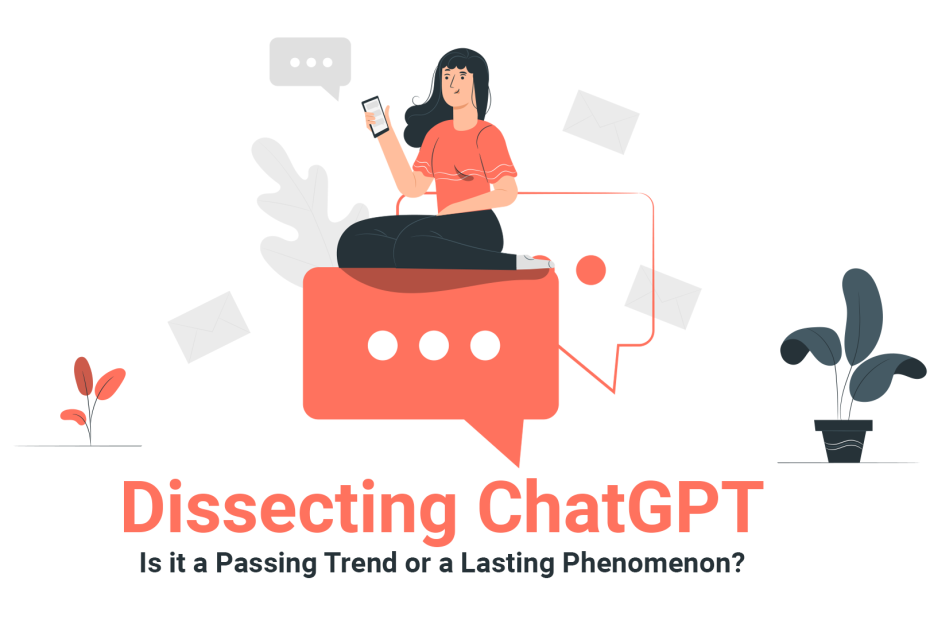 If we look back even a decade ago, the only concrete point of reference for artificial intelligence (AI) we had was J.A.R.V.I.S. from the movie Iron Man. However, we have come a long way since then and AI has been the driving force behind many pathbreaking innovations. One such innovation that has got everyone talking these days is ChatGPT.

This little technology promises to revolutionise the way we consume information. Fuelled by the power of Natural Language Processing (NLP) is this technology trained to answer questions similar to how humans would. Most of the people who have explored this platform are in awe of its ability to provide human-quality responses. It won’t be wrong to assume that it may eventually have the power to completely transform how humans interact with computers and how information is acquired.

On that note, let’s dive deep into what OpenAI’s GPT-3 Chatbot is and what it’s capable of.

ChatGPT (Generative Pre-training Transformer 3), which launched on November 2022, is a revolutionary chatbot powered by conversational AI and Natural Language Processing. It has been developed by San Francisco- based startup OpenAI. It’s part of a new generation of AI systems that can easily converse, generate legible texts on demand and even write codes.

The conversational AI enables the chatbot to understand and generate human-like natural language with unprecedented fluency and accuracy. It’s the largest, most impactful language model ever created, with 175 billion parameters and the ability to process billions of words in a matter of seconds. It’s generative because it’s capable of generating long sentences of unique text as output. Thus, ChatGPT is the most innovative language model that exists.

What Can ChatGPT Do?

OpenAI developed ChatGPT platform with a technique called ‘transformers’, a specific kind of neural network architecture created for processing natural language. Now, what are transformers? It’s the neural network’s architecture developed by scientists at Google in 2017. It utilises a self-attention mechanism which helps with understanding languages.

Coming back to ChatGPT, the chatbot also integrates a masked language modelling method, which involves predicting a subsequent word in a sequence based on preceding terms. This allows the chatbot to create accurate and prompt responses, similar to how a human would provide. This model

All in all, ChatGPT presents an intuitive language model that can respond to queries and prompts that resemble those of a human being. It utilizes machine learning algorithms and artificial intelligence methods. These technologies empower the chatbot to process and comprehend text inputs in plain language.

To offer a little peek into its most basic ability, we asked ChatGPT to describe the impact of the Russia-Ukraine conflict on the global economy. It managed to provide a concise answer that’s articulated perfectly.

Simply put, the chatbot GPT-3 allows users to offer the pre-trained AI a huge array of worded prompts. These can be questions, requests for a piece of writing on a specific topic or a large number of other worded requests. Pre-trained implies that the language model hasn’t been created with any special domain knowledge, but it can take on domain-specific tasks such as translation.

How Does the Chatbot GPT-3 Work?

The core functions of ChatGPT may not seem that complicated as it receives your requests, questions or prompts and presents accurate answers. However, the technology to carry out these functions is more complex than it sounds. The model was trained with the help of text databases from the internet. This included a staggering 570GB of data obtained from books, articles, Wikipedia, research papers and other types of content found on the internet. To be precise, at least 300 billion words were fed into the system.

If you have tinkered with the chatbot long enough, you know it comes with a massive range of capabilities. From writing poems to simplifying quantum mechanics, the possibilities are endless with this tool. Moreover, it can produce a well-drafted article on quantum mechanics in a matter of minutes, while we spend hours researching the same.

That said, OpenAI is also perfectly aware of the internet and its love for making AI produce dark and biased content. Similar to its predecessor Dall-E image generator, ChatGPT will prevent you from asking inappropriate questions or seeking help with potentially harmful requests.

A Brief Idea About the Architecture of GPT-3 Chatbot:

The GPT-3 AI chatbot is a family of language models, not just one specific model. The number of variables for training the language model may differ for each model in the family. The OpenAI GPT-3 Chatbot is built with the same transformer-based architecture as the GPT-2 model which includes the changed initialization, pre-normalization, and reverse tokenisation.

The most prominent version of GPT-3 consists of a 3.2 million batch size, 96 attention layers and 175 billion parameters. Even though OpenAI GPT-3’s architecture is similar to GPT-2, GPT-3 is much more evolved.

Use Cases of GPT-3 AI Chatbot Across Industries

To this date, over 300 applications across diverse industries are powered by GPT-3 AI chat. These applications have adopted a suite of GPT-3’s advanced capabilities. Presented below are ways GPT-3 has been integrated.

The company enables their clients to analyse and understand their consumer base with the help of GPT-3. The tools provide valuable insights from customer feedback in the form of simple and legible summaries.

With the help of ChatGPT, Viable determines themes, emotions and sentiments from surveys, live chat logs and help desk tickets. The tool then pulls insights from aggregated feedback and summarises it in seconds. For instance, when asked what disappoints the customers about the checkout experience, Viable may provide the insight that the customers are disappointed because the checkout flow takes too long to load.

This innovative platform is creating a new genre of interactive storytelling and utilising GPT-3 to help empower their story-driven “Virtual Beings.”

This platform adapted the hero of Neil Gaiman and Dave McKean’s Wolves in the Walls Lucy and turned it into an Emmy Award-winning VR experience. Lucy can have natural conversations with people thanks to dialogue generated by GPT-3 and even appeared as a guest at Sundance Film Festival and presented her own movie.

This company has adopted GPT-3 in their product, Algolia Answers that offers relevant and fast semantic search for their customers. Algolia partnered with OpenAI to integrate GPT-3 with their advanced search technology after OpenAI’s API was launched. The API helped with a better understanding of customers’ questions and connected the specific part of the content that answers their questions.

Considering the GPT-3 is relatively new, the platform comes with some limitations which have been outlined clearly on OpenAI’s website as well. These limitations include:

Enhancements Introduced To The GPT-3 Models

As the platform becomes more accessible, OpenAI aims to improve it continuously. Whether integrating a content filter to providing new features for developers, the platform is constantly evolving. Some of the recent features include:

Searches showed information for relevant context to be incorporated into the prompt. This feature can be employed to develop apps such as customer support bots with no fine-tuning.

This feature utilises labelled training data without fine-tuning. It resembles the performance of state-of-the-art fine-tuned models as it searches for the closest examples with respect to the input query and adds them to the prompt. This way, it presents an autoML solution that is simple to configure and adapt.

It serves as a backbone for the Answers and Classification endpoints that encompasses a massive number of documents while also being affordable and fast.

Bias and misuse are persistent problems across industries that the platform takes rather seriously. OpenAI reviews all applications and approves only the ones that use GPT-3 AI chatbot responsibly. The developers at the platform employ safety measures like rate limits, user verification and testing before they move into production. The platform actively looks for signs of misuse and possible vulnerabilities.

It offers prompt design examples for dozens of use cases that users can start programming with directly in Playground, such as a Spreadsheet Generator, Airport Code Extractor or Grammar Corrector.

Essentially, OpenAI’s GPT-3 Chatbot is a platform where you can ask a question and receive a cohesive answer on any topic. On the other hand, Google Search provides links to the websites that the search engine considers relevant to the questions searchers ask. Hence, it’s normal to assume that GPT-3 is a competitor because ChatGPT often offers significantly superior responses to those offered by Google.

However, it won’t be wise to put our complete faith in ChatGPT just yet. When using the information sites like Google and Wikipedia, it’s crucial to ensure the authenticity of sources. Now ChatGPT provides raw text without any links or citations, hence verifying the accuracy requires additional effort. But the responses are helpful and occasionally even thought-provoking.

Moreover, Google has heavily integrated AI and NLP into its language models and search engine. In fact, the irony is, even while writing this blog on ChatGPT, we have relied more on Google search to find the most relevant and reliable resources. Thus, there’s no reason to believe that ChatGPT will replace Google Search, at least for now.

That said, CHatGPT definitely paves the way for more advanced technological innovations in the future.

What Does the Future Hold for GPT-3 AI Chatbot?

As further enhancements begin to roll out, this family of language models are capable of churning out more innovation by leveraging Natural Language Processing. This would pave the way for increasingly clever and capable machines that can easily comprehend and produce relevant answers to queries.

GPT-3 shows a lot of potential in the area of language translation. The model can understand and provide texts in multiple languages, thereby enabling more efficient and precise translations. This makes it easy to remove language barriers when communicating with people from different regions.

Text summarisation is another area that GPT-3 is expected to revolutionise. GPT-3 is already capable of summarising lengthy documents and articles making it easier for readers to grasp the message immediately. It accomplishes this by understanding the meaning and textual structure and this could be beneficial for different professions such as journalism.

Tony Stark’s J.A.R.V.I.S. may be leagues ahead in terms of AI capabilities, but the reality isn’t too different. In the past decade, AI has shaped some of the greatest technological innovations and OpenAI’s ChatGPT is one such outcome.

This family of language models have created quite a stir in the field of technology with its capabilities. OpenAI has been proactively monitoring the limitations and improvements to the model. All in all, ChatGPT definitely holds the potential to be the driving force behind multiple industries and sectors.